You are here: Home > Year in Review and Looking Forward
By Mike Kauffelt II, CFA, Co-Chief Investment Officer on January 15, 2019 in Market Update

In our January write-up, we typically begin by reviewing the previous year. Last year proved to be one of the most difficult years in a while. At Bill Few Associates, we preach diversification. Our belief is that when you hold a diversified portfolio, at least some portion of your portfolio is working at all times. That has proven to be the case, until 2018. Ned Davis Research tracked eight different asset classes going back to 1972: U.S. large-caps, U.S. small-caps, developed international, emerging markets, long-term Treasuries, U.S. aggregate bonds, commodities, and REITs. Last year was the first year that none of these asset classes gained 5%. In fact, if it were not for a late rally in bonds, it would have been the first year that none of the asset classes finished with positive returns.

In going through the details of 2018, we thought we would try something different and use a table. The first column of the table shows the 2018 returns for various asset classes. The next four columns break it out by quarters and the final three columns show what happened in each month of the fourth quarter. 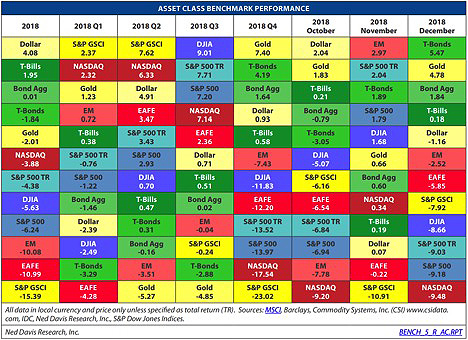 Some of the key takeaways from the year were that the S&P 500 had its biggest yearly drop since 2008 and the 14.0% decline in the 4th quarter was the worst since the 3rd quarter of 2011. The NASDAQ, which has a higher concentration of technology stocks than the S&P 500 and the Dow, was the best performing U.S. stock index in 2018, but the worst in the 4th quarter. International stocks, which outperformed in 2017, lagged in 2018. The strong dollar added to these woes. The table on the previous page shows EAFE and EM losing a little over 10%. These returns are in local currencies. Once these returns are translated into dollars, the returns fall to approximately -14%. Bonds beat stocks for the first time in four years, yet barely eked out positive returns. If you look at the table and wonder what the S&P GSCI that had the worst returns was, it is the abbreviation for a commodities index. Crude oil’s 23.5% drop in 2018 pulled the index lower.

It has been a while since we rolled out one of the old investment market clichés, but “the financial markets hate uncertainty.” Starting in late 2018, we escalated tariff threats with China, had an election that changed the political majority in the House of Representatives, experienced weakening global growth and, finally, saw growing concern that the Fed may go too far in tightening monetary policy. That certainly sounds like a lot of uncertainty. It is at least enough to worry even the sanest investors, especially given the length of this current bull market. It has been ten years of good economic times, at least financially for the U.S. markets. Someday, this bull market will end (before it starts again) and after so many prosperous years, it is fair to be concerned that this may be the time.

The first few days of January have been encouraging as 2019 is starting better than 2018 ended, but we still have a long way to go! Our best forecast, based on a consensus of research we trust, is that the stock and bond markets will remain choppy at least through March. That will give us time to see the results of the China trade negotiations, as well as observe if all branches of our government are playing nice with each other. We will also be watching to see if global growth regains its footing in early 2019, as well as for any fresh signals sent out by the Fed on future policy. The good thing about the sell-off in assets in late 2018 is that by most relevant market indicators, most asset categories are cheaper, and the U.S. economy is currently still strong (we had the best job’s number in ten years last month). It is like your favorite store just gave you a 10% off coupon with no strings attached.

However, many decades of experience have taught us that when the market is falling, the big concern is that it might go even lower. Current forecasts do not tell us where the bottom will be in this market cycle, but based on current economic data, this does not seem to be the beginning of a bear market. This feels like a correction in a very long expansion, that, although old, still has some potential for growth. As stated earlier, we remain diversified and invested until we see any better options for long-term wealth accumulation. Wishing you all a happy and prosperous New Year, Mike and Tom.

At Bill Few Associates, we offer a wide range of financial planning services tailored just for you.

Questions?  Give us a call.  We are here to help.